Two months after our last session (thanks to things like 8th grade finals, a 4 year-old's birthday and party, Father's Day, etc.), we finally had our next SWL session. Session 6 of "The Castle Audubon Campaign" happened tonight, after our Independence Day dinner (I cooked burgers and dogs on the grill). My wife knew I have been wanting to game (especially since our Father's Day's game was postponed by our AC conking out). So, she asked the 4 year-old if he wanted to play Swords & Wizardry with Daddy tonight. It was nice digging out the S&W Legion folder once more and picking up right where we had last left off.

My wife was going to sit this one out as she was wiped out from the heat, but then decided to join in just before our boys returned to their player characters, still adventuring within the dungeons of Castle Audubon...

First, the group found a staircase leading downstairs but opted not to follow it, as they did not want to leave the level they were on -- just like when they had found a trap door leading down in a previous session.

So they took another passage further south from there. The first room the three adventurers entered was occupied by 10 humans, who wore necklaces similar to those worn by the rascals the dwarf and magic-user had turned into the local authorities previously: a runic K. In fact, one of them wore a silver brooch in the shape of a runic K! Vomport the fighter (our 14 year-old) tried to talk to the first brigand, only for the 10 of them to wield their swords. While the fighter and dwarf entered the brigands' chamber, Carvell the Magic-User (our 4 year-old) weaved a spell prepared that morning from the doorway. In moments, all 10 men were asleep upon the ground. Swordwork made corpses of them quickly before they could awaken. The 9 necklaces and silver brooch -- along with a sack of copper coins -- were soon in the party's possession. They figured the runic K's could be used to show the townsfolk in the village of Audubon that there was something bad brewing here under the ruined castle.

The fighter, slightly wounded in an earlier fight with fire beetles, decided to risk a sip from one of the two potions the group had found previously. Sniffing the two of them, he learned the clear one smelled of almonds while the pink hued one smelled of roses. He decided to sip the latter potion. Suddenly, Vomport and all of his possessions grew until he was 3' taller (to 9'7") and weighing about 350 pounds! His head was just 5" below the ceiling of the dungeons. Feeling confident that his growth would mean being harder to kill, Vomport exhorted his mates to press on.

After that, they followed a passage and Stormstone discovered a secret door. The dwarven thief (my wife) listened at the just-discovered portal and heard a shuffling walk from within. The fighter remarked that he thought it must be a zombie. His suspicion was confirmed after he kicked the door in and the party fell on a lone zombie. It was wounded by the dwarf and the fighter, but the wizard brought it low with his dagger expertise. If our 4 year-old was older (and more egotistical), he would have been bragging after tonight's session ended, as he felled all of "the bad guys" this session.

The session was ended just before 8:15 p.m. so that the little ones could enjoy a snack before we braved the drizzle to watch our town's fireworks from our front walk.

Until next time, Happy Gaming and Happy 4th of July!
Michael 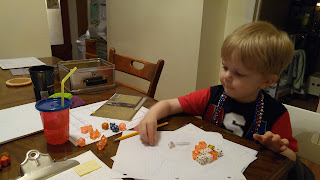 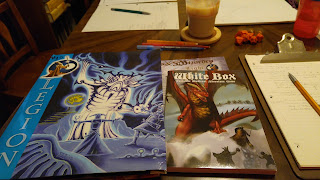 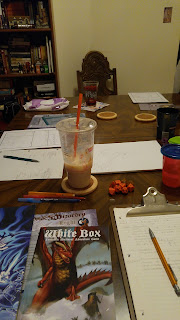